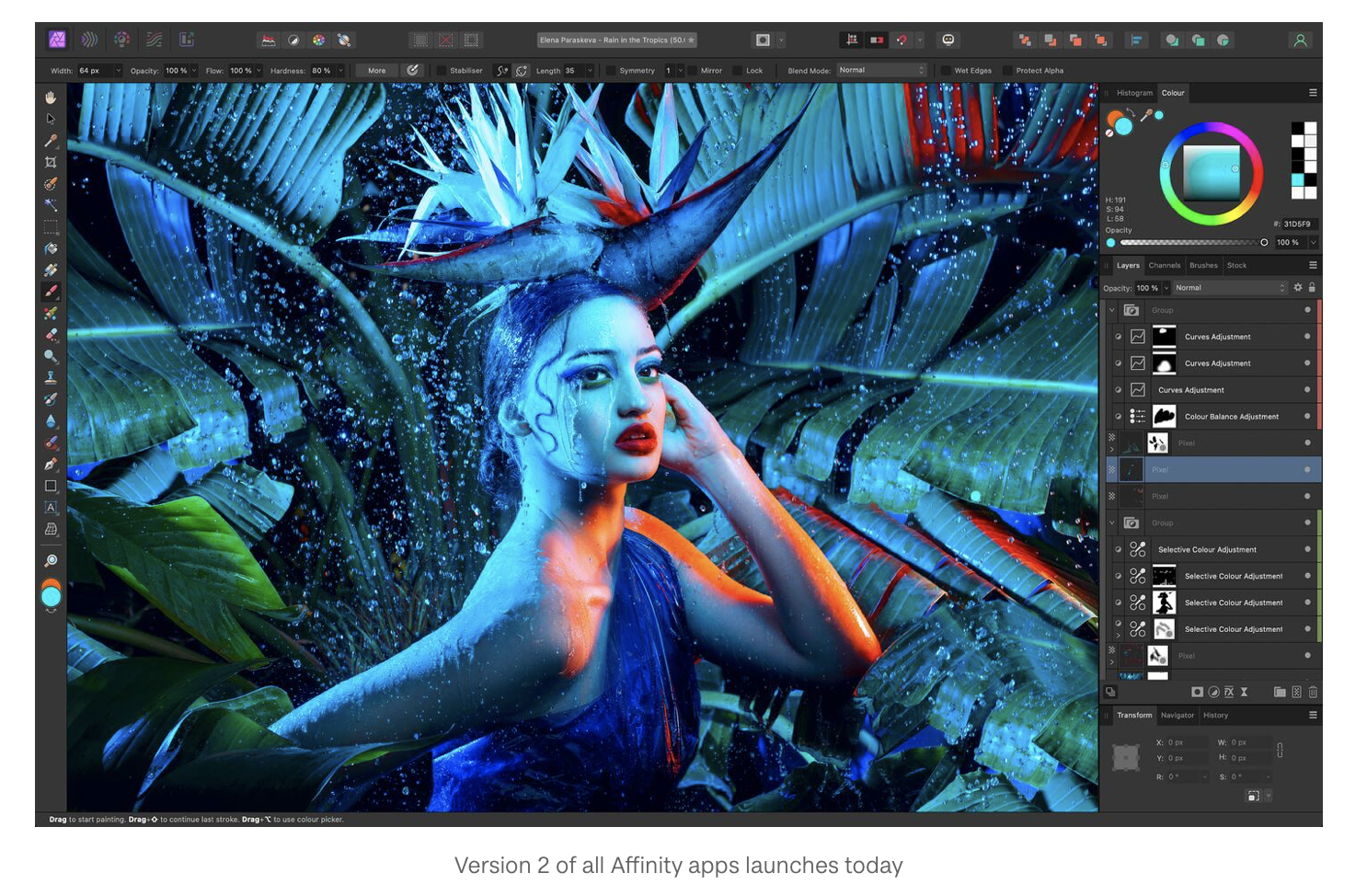 “Setting new standards for creative software, Affinity V2 is by far the biggest, most exciting launch in the history of Serif. For the very first time we’re bringing the very latest, highest performing versions of all our products to the market at the same time, with some simply stunning features.

“At Serif, we know that we don’t work for ourselves – we work for the photo editors, the artists, the illustrators, the designers, all those people who rely on Affinity software as the engine to power their day.

“We have worked tirelessly to not only include many of the new features our customers have been asking for, but a whole host of usability and workflow improvements to make the apps more productive than ever. We think Affinity users both old and new are going to love it.”

Alongside the launch of Affinity V2 comes the eagerly awaited release of Affinity Publisher 2 for iPad, completing the core suite of apps available on macOS, Windows and iPadOS. Feature packed, intuitive and touch-friendly, it is the first time a truly professional, desktop-grade layout and page design app has made its way to the platform.

“Our work to put full desktop-quality creative software onto iPad has led the world and set new industry standards for what users should expect from iPad apps. And now we’re the first to bring all the features you’d associate with desktop publishing to the iPad as well.

“There’s genuinely never been anything like this before. The power and portability of Affinity Publisher 2 for iPad allows you to take page design and layout out of the confines of the office and into whatever space brings you most inspiration.”

Affinity V2 Universal Licence has also been announced today giving customers an option to buy a package containing Affinity Photo 2, Affinity Designer 2 and Affinity Publisher 2 for use on Mac, PC and iPad – all for a single all-inclusive amount.

The Universal Licence will normally be available for £144.99 – a £155.92 saving on buying all the apps on all operating systems individually. However, Serif is currently offering a huge 40% launch discount making the whole V2 suite available for a remarkable £89.99 one-off cost with no subscription.

Ashley Hewson concludes: “The ability to buy for a one-off payment is something that makes Affinity the only viable option for many of the brilliant and inspiring creative people around the world, who would otherwise not have access to the highest-quality tools. There has been a lot of speculation about us moving to subscription recently, so I’m pleased to confirm that isn’t the case!

“For our existing customers we have also been very conscious that, considering many of our sales are generated via app stores, it’s not possible to provide upgrade pricing. That’s the main reason we have decided to offer such a large launch discount – to give users a chance to upgrade at an incredible price.”

Users who don’t require the full package will still be able to buy Affinity Photo 2, Affinity Designer 2 or Affinity Publisher 2 individually for Mac, PC or iPad with the same 40% launch discount. All apps, including the V2 Universal Licence, are also available as a 30-day free trial.